Is the Media Service not available for Android?

One thing I was excited about with Backendless was the fact they had a whole Media Service for media playback/streaming.

just one thing? nothing else looked interesting?

yes, it is iOS only at the moment

Possibly. Meanwhile you can use the code generation (built into Backendless console) to generate Android code for the media service and see how it works.

haha yes, I just meant that’s what really sets y’all apart from Parse (which I am converting over from).

Well the issue with that is the code generation only generates code for videos and not streaming audio. Is there anyway I can look at something? I really need to get this done.

Well, no, that’s not the only thing that sets us apart from Parse, there are plenty more, but that’s a different topic.

Media support for Android is at the “experimental” stage. At the present moment the resources available to you are the code you generated plus our SDK (which is open source).

should i pass application id for stream name?

Try to set tubeName to ‘Default’ and streamName to the name of your media file.
Also, please make sure that you have a ‘media’ folder in Files

Please, make sure you have the ‘media’ folder.
Also, we don’t support ‘3gp’ format. Please use mp4 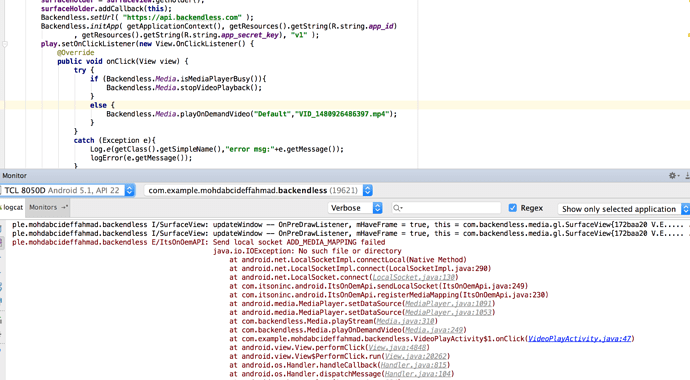 This is a complete, working example of the functionality you are trying to achieve.
Also, please notice, how the stream is configured:

“Based on” does not mean they’re the same. Let’s start with the smaller: can you confirm that the generated sample (as it is) works for you?