I’m receiving an error when trying to upload a custom service I developed in Java. I try to deploy it using the web console but get an error saying:
Can not parse generic service: CodeRunnerException: CodeRunner did not return object on requestActionInvocation.
A screenshot of the error is attached. This randomly started happening a few weeks ago. The jar was working fine and I didn’t change anything when this started happening.

It also works fine when I debug it using code runner locally on my mac. 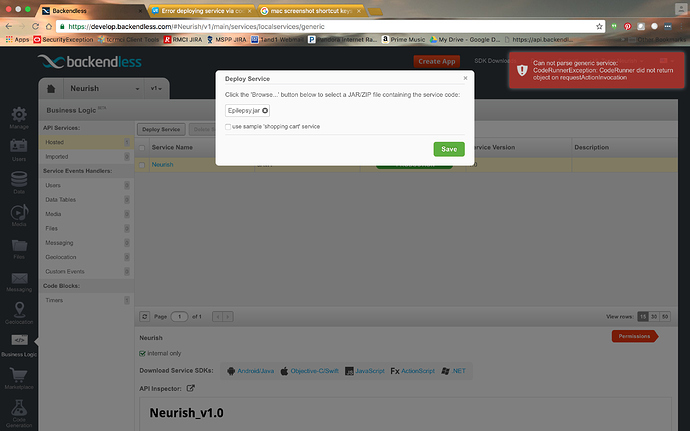 Can you please share the service’s jar so that we could test it? You may send it to support@backendless.com.
Also, does it work if you deploy it using Deploy.sh script instead of console?

I emailed the jar to the email address you listed. I’m not sure about Deploy.sh but it does work when I deploy it using CodeRunner.sh in the terminal.

We received the service jar, thank you. Could you please also send the source code of the service? It would help us locate the problem faster.

Thank you Phil for opening the topic.

@Sergey
I am experiencing the same problem trying to deploy my custom services using Deploy.bat (win environment).
“Can not parse generic service: CodeRunnerException: CodeRunner did not return object on requestActionInvocation.” , but CodeRunner.bat works just fine.
If I try using the web console I dont receive any message.

I have sent a email to the support address with my jar (source are packaged inside) and some other info.

I sent the code over a day or two ago.

Please create a dedicated topic for your problem, since it may not be the same.

Hi Sergey, I have created a new topic here, thanks

I tried adding that code but it can’t find the getInstance method. It says identifier doesn’t exist.

I tried adding that code but it can’t find the getInstance method. It says identifier doesn’t exist.

But there is such method in the SDK, and is has always existed.
Make sure you’re importing LogBuffer from com.backendless.logging package.

The problem was I was writing the code at the class level and not in a method. I put the code in a method and called that method whenever I needed to instantiate the logger. It worked. Thank you.