Error while getting current geolocation on Android

My app tries to access the current position of a user in order to plot it on a map.

In a browser and on iOS this works fine. On Android, using the Backendless Viewer app, I can’t manage to get and display the position.

I used the logging API to return the output of the device API block and it returns an error, but an empty one: there is no detail whatsoever about the error.

Here is the logic: 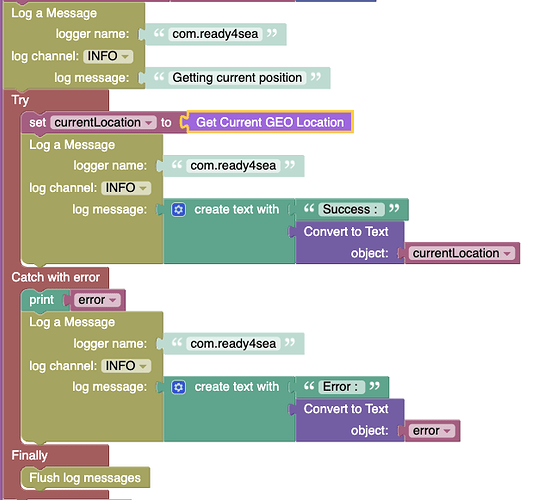 And here is the result:

Backendless viewer app has been granted location permission but it never seems to ask it to the phone (it does not appear in the recent location requests and I never get a prompt to grant the permission).

Thank you for this information. We are investigating this issue.

Just as a followup, same issue when running the app in debug mode via the Flutter native mobile app shell. Probably not surprising, but just to confirm.

The bug has been fixed. At the moment, a new version of BackendlessViewer is being reviewed on GooglePlay. I’ll let you know in this thread when the change is available for use.

Thanks for your feedback.

Great news about the Viewer app !
Do you know if that will also solve the same issue in the native mobile app shell ?

It’s already fixed in the shell, you can try it:)

OK, thanks, will try it.
The only thing is having to make all the modifications once again after pulling the latest version, so I might not try it today

Later, you can create a separate branch(locally) for your application. Pull changes from the master, and then merge them into your own. This will allow you not to waste time.

Yes, I think I need to set this up.

One more quick question while I’m at it : does the folder for the shell need to be named native-mobile-app-shell or can I modify it ?

For now I have set up the following structure to allow both debug and release builds :

What would your recommendation be to get well organized ?

As far as I remember, it can be called whatever you like.
If nothing is missed, then you can completely get rid of this name and install your own.

It worked fine, thank you.