Trying out the newly announced native mobile app shell, which could be a game changer for me. I was going to start development on another platform when I saw this. I figured I should try it out because if Backendless allows me to build both back- and frontend in the same place, it seems better. I really need to validate that this can and will work, though, because my target is a mobile app and a web app is not my objective.

However, I am having one or more issues (don’t know if they’re linked and if they are specific to Backendless or not).

I understand that something comes as a duplicate. Any clue as to what ?

I get warnings about

Even when I try to change the value from 8.0 to 9.0 in the files, it seems to come back next time. I suppose these files are rebuilt automatically and not persistent.

For this one, I understand that building with the Backendless bundle identifier is probably not allowed since my Apple profile is not part of that team. Could you provide guidance as to whether it would be appropriate to change the references to that bundle to my own ? I have found them in the ios/Runner.xcodeproj file.

Issue 4
when running flutter run with an Android connected

I don’t have any clue about this one.

Note : I am running a MacBook with an Apple Silicon M1 ARM chip if that has anything to do with it.

Thanks for any help which could get me to build and run a simple app in order to prove that this new possibility is indeed an opportunity.

All problems, with the exception of the command, and warnings, are some kind of incorrectly cached data.

Try the steps above and describe if it solved your problem.

Thank you very much for your reply and for taking the trouble of providing guidance.

I restarted from scratch, pulling the latest version of the native-mobile-app-shell, and inserting the ui assets therein.

I then followed your recommendation 1. instead of step 6. of these instructions : https://github.com/Backendless/native-mobile-app-shell

When you say “Make sure the iOS deployment target is 10.0” I understood that to be in Xcode > Runner > General > Deployment Info. Or should that be elsewhere ?

I also did not have to apply the replacement code in your recommendation 2. since it had already been modified in the latest version of the native-mobile-app-shell.

I checked afterwards in the project and it seems indeed that all IPHONEOS_DEPLOYMENT_TARGET values are set to 10.0. The warnings reported in my Issue 2 disappeared. Hooray ! Thanks.

Here is the full output of flutter run.

As I understand it, the flutter run command should run a debug version of the app on my iPhone, right ? You guided me in your recommendation 3. to a page about building for release, yet here I am trying to run and debug, not release. At the end of the native-mobile-app-shell instructions, in the section “Setup” it said “After that, your application will be ready for testing.” I thought that was the same.

Can you confirm that I have to go through all the steps in the “Build for release” section before being able to debug ?

About your last step 4, I am afraid I will need more guidance. Where am I supposed to press ‘Pub Get’ ? To me pubspec.yaml is but a code file. I am using the VS Code IDE if that is of any help.

Also, how could this all be due to some kind of incorrectly cached data, since I restarted absolutely from scratch. All commands were executed for the first time.

Thanks again for your help in moving forward. I would really need to validate that the shell does work, otherwise I will need to find some other way of building my codeless app.

I am sure Nikita will get back to you, but I wanted to ask if you tried building and running any other flutter project? It seems to me the majority of the issues are unrelated to our native shell and have something to do with your environment configuration. Just a thought…

Thanks for the quick reply.

Indeed I wondered, just like you, whether the issues I was facing were linked to Flutter more generally or to the mobile app shell.

This led me to believe that the issues were not general to Flutter, but rather more specific.

Now, I am not competent to build another app to test this hypothesis - this is why I am trying to go for a codeless app !

Would be glad to get your feeling on this one.

Just wanted to let you know that I finally managed to run the app on a simulated iPhone.

I erased the pubspec.lock file and recreated it through :

This was suggested by Nikita above, but I had not gone fully gone though because the way to regenerate the lock file was unclear (see my previous posts). I finally found the way forward elsewhere and it worked.

The lock file actually comes with the git release, and for some reason did not seem to work for me. Since the two commands above, also listed in step 6. of https://github.com/Backendless/native-mobile-app-shell, seem to rebuild the lock file, may I suggest that it is not needed in the release ? Because it indeed seems to introduce “some kind of incorrectly cached data” as suspected by Nikita, it would seem reasonable to not deploy it and to actually rebuild it locally through clean and pub get.

Here is a follow up on where I stand.

I have been able to run on both Android and iPhone simulators.

However, running on a real iPhone has not been possible. I am still encountering the signing issue, even though I am running flutter run, which should run in debug mode. 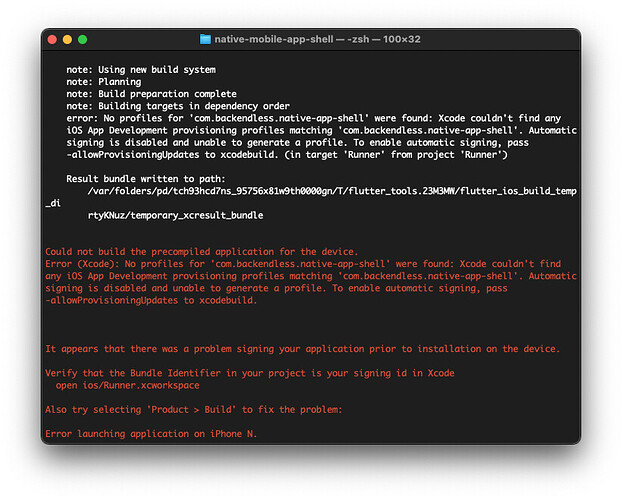 I also keep having the duplicate implementation message, but from what I understand that is just parasitic information from flutter which means there is something wrong later on (the signing issue).

Hi @Nicolas_REMY.
This problem occurs because you are using the default package ID from the project in the GitHub.

Thanks for the feedback, I took this information into account and removed pubspec.lock file from the git repository.

The lock file actually comes with the git release, and for some reason did not seem to work for me. Since the two commands above, also listed in step 6. of https://github.com/Backendless/native-mobile-app-shell, seem to rebuild the lock file, may I suggest that it is not needed in the release ? Because it indeed seems to introduce “some kind of incorrectly cached data” as suspected by Nikita, it would seem reasonable to not deploy it and to actually rebuild it locally through clean and pub get.

Hi and thank you for your reply.

From the instructions at https://github.com/Backendless/native-mobile-app-shell I had understood that after setup steps 1-6, it said “After that, your application will be ready for testing.”

If I understand correctly what you are saying, you mean I do have to go through the “Build for Release” steps even though I only want to test, and not release. Can you confirm, please ? If so, I would suggest adapting the documentation so that it does not lead to believe that after Setup tests 1-6 the application can be tested on a device.

Yes, you are right, I will transfer the information about setting the bundle id and team to the previous block.