I’m having an issue with owner policy whereby the owner can update their user object even though the api key they are sending the update with has a deny X on the Update function:

Object in question testing with:

The object is updated and admin is now set to true.

It was my understanding that if the API they are using explicitly denies UPDATES that it would stop all updates on that table regardless of the owner policy.

I only want to be able to update that admin flag via the cloud code, it works fine if I set the user as not owning that object.

I am could not reproduce your issue in the Rest console, and Posman too. In my case, all works as I want. Also, I try to reproduce in your app. and catch this response:

Could you please tell me what you do step by step with details?

As discussed, I have shown you on the chat and you can now replicate.
As it stands any user that registers for a backendless app is automatically created as the ownerid for that object.
That user assuming they have an owner policy of update can bypass the Custom Key role permissions and update their object.
Following this guide this shouldn’t be possible: Security - Backendless SDK for JavaScript API Documentation
Layer two is before the Owner policy. 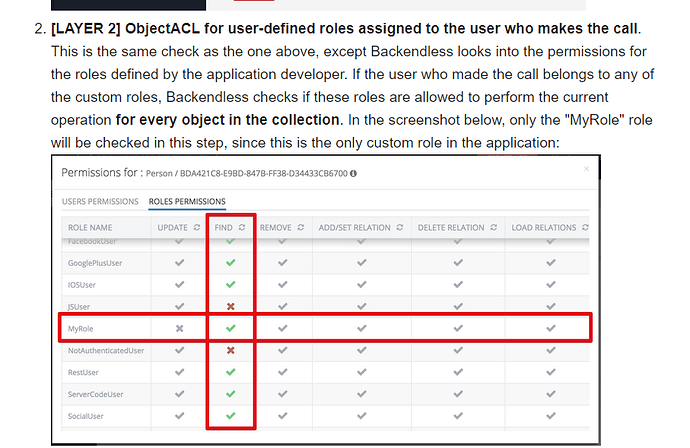 The user defined role on my app which is linked to the custom key is completely bypassed (it has update as crossed) and the user can still update their object.

We investigated this issue further. The reason you’re seeing this behavior is that the roles associated with API keys (such as the TippleUserRole) are handled as system-defined roles and thus are placed at level 7, which is below Owner Policy. The actual problem is that the documentation does not reflect that and I am scheduling an internal ticket to fix that.

In order to achieve the behavior you’re after, you should create a user-defined role, assign it to the user (either in console or via API) and customize the permissions for that role.

I just assigned user role ‘TEST’ to the user we are testing with:

And it updated fine. So the custom user roll still isn’t blocking the owner policy?

What is the name of the table where you update an object?

The one I’m testing with is the User table

Thanks. There are two more questions:

Here’s what I did:

Thanks Mark, that now stops the user from being to update directly via the REST console/postman.

The problem I have now is that the user calls a custom api command in business logic, this command does some logic to check that the user can be admin, then tries to set the user property admin to true, it now comes back saying 400 - User has no permission to update entity (1012)
The Server code user has full perms:

image2141×28 1.79 KB
I assume this is because its being blocked on the user role calling the custom api endpoint.

How do you suggest handling this? Is there anyway on the cloud code that I can say forget the user that is making the call to this function?

How does the Admin role fit in here? Are you suggesting login as a user with Admin role set on cloud code to execute the update on the user that’s called the API command? I’ve explicitly set the role to have grant on the table.

The list from the page you references states 4.Table Permissions for the user-defined roles - this we have just set to have deny on update.
The only way I can think is that we somehow tag the user with the admin role when we want to do the update…
InvocationContext.setUserRoles("Admin");
This isn’t probably the right way to do it/it doesn’t work.

I assumed you’re checking if the user has the Admin role when you wrote this:

To assign a role to a user, you can use the following API:

Just to be clear this is the problem:

The problem we have now is that the user is assigned to role ‘TEST’ and we get an error back saying doesn’t have permission to update object, when the above business logic cloud code executes.

There must be an easier way of doing this? I’d expect the backend cloud code to be able to do what it wants regardless of the user calling the endpoint. I think I asked earlier, is there a way to just forget that a user is calling the endpoint so we can do all the processing.

One way to do this is to disassociate the currently logged in user from the invocation context. Try to do the following before you use the update API call:

Mark my friend, you are a genius, this solves all the issues. Here’s me worrying I would need to find a new backend provider.
Definitely worth documenting this somewhere as I can imagine there are a large amount of insecure backendless apps around.