I’m running into a time.h conflict between the backendless pod and iPhoneSimulator9.2.sdk/usr/include/time.h when I try to run my app on the simulator and it conflicts with other pods I depend on when I try to run it on a device. I saw an unresolved thread about this from a year ago and thought I would resurface the issue since it seems to still be a problem. Are you guys’ aware of the issue and/or any workaround to fix it? Do you understand the nature of the error? I just need more information. I will note that there was a point when I was running backendless on a device and this wasn’t an issue, but now that it has occurred, I can’t seem to get rid of it.

It would help if you could post more information about the error, such as where it comes from and what other dependencies you have added to the pod.

Sure. Here’s a list of my pods and a snapshot of the error received when running the app on a device. 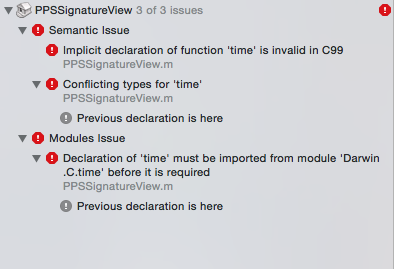 How did you conclude that the conflict is specifically between backendless and iPhoneSimulator9.2.sdk/usr/include/time.h ?

I might be wrong about that but here is a snapshot of how I got the idea. This is the error I get when running the app on a simulator via AppCode. It looks like it might also be coming from PPSSignatureView.

I cleaned the build folder and restarted Xcode and am back to my original working state. I’m a bit concerned since I still don’t know how the app came to be in the conflicting state. Like I said before, the app worked for a time before this issue surfaced and I’m a bit worried now that it will become a reoccurring issue in the future. For now, I will continue testing and let you know if I can reproduce the problem.

As always, thank you for your prompt response.

I am glad you got it back to the working state. It is still not clear to me why you were relating the error you were getting to Backendless. It could’ve been any of the dependencies you included in the podfile…

I was relating it to Backendless because when I switched branches to a state where Backendless wasn’t implemented, the error didn’t occur. I also saw an unresolved issue involving time.h conflicts in the support forums and just wanted more information.

I do not recall ever seeing that issue. If you have a link handy, please share. There are two sides of the conflict. If adding backendless manifested it, there is got to be something else that might be causing it.

Very true. There is always two sides. Here’s that link.

Thanks, Brandon. I scheduled a task for a developer to investigate this further.

If you use CodoaPods to integrate Backendless in your project, and you get the problem with “time.t conflict”, you should remove the file time.h from your project.

We will fix this issue asap in the next CocoaPods release.

Thanks, glad to hear it!

Just tried that out when I got a time conflict and confirmed that it does fix the issue.