Looks like I am trying to do something too complex, have a block in a row that has different sub-blocks with different UI-elements (checkbox, slider, number-input) depending on information type for that row. Using the visibility logic to set the required block and its ui-element to display or not. One ui-element has an icon that when clicked shows a modal pop-up to perform a calculation on 2 variables in PageData,loading row-data to page-data. Initially the page loads and I can perform 1 action after which the page freezes and Chrome taskmanager shows high cpu. When analyzing in the developer tools I see the “Visibility Logic” of each block is continously triggered, would expect triggered only once on inital page rendering, also see continous update on “ClassList Logic” of the modal block, again would expect this to run only once. What type of action would trigger these continous updates?

Class List Logic and Visibility logic should be triggered on any change in Page Data. It’s expected behavior.

What about disabling code, you can try to open the context menu on a block and disable him. 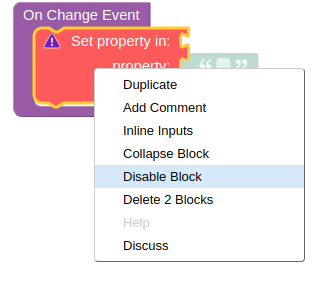 Also, I can offer a hint, if you want to disable all code of handler, you can use an If condition as a wrapper, and disable him. When you realize you need to return the code, just take it out from the wrapper.

Ok, thanks that helps, yes I assign a value to variable in page-data but that is the same value as before so would not expect a refresh. Becomes a lot of coding for a no-code app…