Changes are getting undone automatically

Team,
It’s very annoying
I am doing changes and publishing them to production.
After a few hours
I am checking changes are getting undone.
From

Is it still doesn’t save after publishing? Can you try one more time, and check if it works. Between publishing and applying, changes exist some delay, but it’s less than one minute as rule.

If this still happens with you, provide me please your app id, describe step by step what are you doing and we investigate your issue.

Sorry for this inconvenience. Could you please:

@Dima_Vak
Not getting any error Dima as its happening after deploying, working fine as well.
Changes gone after few hours from server.

I can see there is a team of 4 developers in the app and also I can see around 60 deploys for this day (changing BL on the server), so is there any chance that someone from your team erases your changes?
It may not be on purpose, just someone edits the same APIService/Handler/etc. at the same time with you but deploy it later after you

No way @vladimir-upirov
Only I am doing changes and also you can see the IP address if you can from the location we are deploying.
Suppose if anyone is deploying, the changelog should show old changes as those are also not showing.

The changelog maintains the changes done on your computer only, it doesn’t have any changes made by anyone else. When the logic is deployed, it runs as code, not as codeless blocks. Even if the codeless logic in the form of blocks changes and is not deployed, the code that runs on the server is not impacted.

When you deploy and get a confirmation that the logic is deployed, you can reload the browser to make sure the logic looks exactly as what you had.

@mark-piller Is there any way to track this?
Its happening only in one API. Which screenshot I sent you after that I canged that condition and now its again showing like I didn’t change anything. 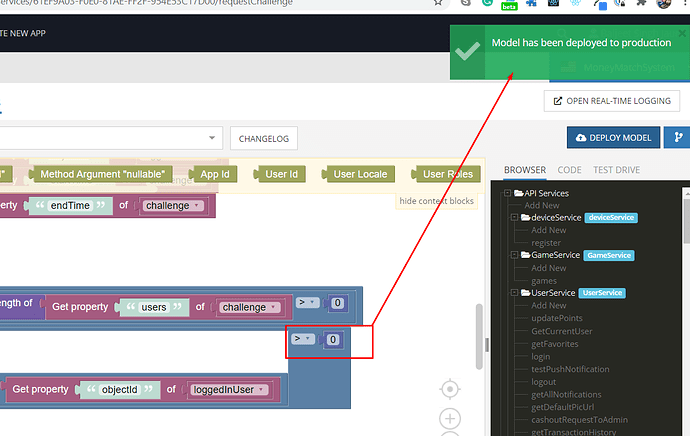 Can we check the same change on server tomorrow without deploying anything to server?

Try opening that logic in another browser or in Chrome’s incognito mode. Do you see any changes there?

Same thing will be going to happen today now.

I believe it happens because of the “exceeded the quota” error with Browser LocalStorage, as you have shown here Deploying production to Dev enviornment - #10 by Baljeet_Singh

The issue has been fixed and it is in the testing stage, we are planning to release it next week, while it’s not I can recommend you to clean up your local storage manually

@vladimir-upirov
Hi,
Still facing this issue.
When will be fixed it?

The issue is in testing, we are planning to release it this week. As soon as the fix is in production, we will let you know.

@Marina.Rudenko Any update on this, please.
We are very stressed. Daily our changes are undoing automatically.

In this release we have added functionality to help you avoid these problems. This is the Local Storage Cleaner. The following popup will appear if you have reached the local storage limit. This functionality will help display if any Backendless applications are storing data in local storage. This can be either UI-builder data or Codeless Business Logic data. It also has a function to clear Backendless data from the local storage.
https://monosnap.com/direct/vwSgNrA35yW7IxAEPr8uegOyQ63Vs9

If Local Storage Cleaner can’t help you, I recommend you do it manually.
Go to local storage in your browser, and delete every key from here ( screenshot ). ( You must be in the develop.backendless.com domain )
Don’t forget deploy your codeless logic if it not save

Can we manually open this popup?

No you can’t do it.
It only appears when the local storage is full.
In this popup you can clean only codeless keys.
I am guessing that your storage may be populated with other keys
Thats why I recomend you clean it manualy